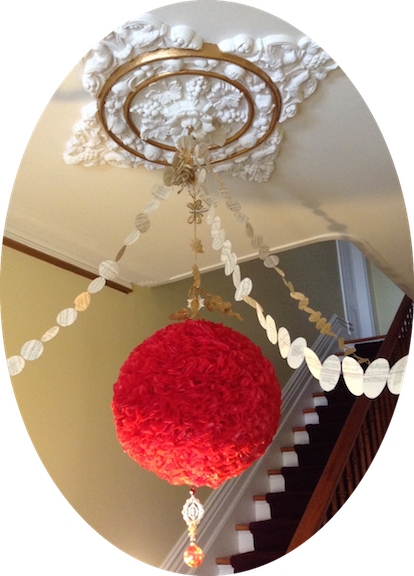 This year, I went with a bold red statement. It's an easy, low-cost project that creates a big impact. Rather time-consuming and repetitive, I did it in stages to relieve the boredom. 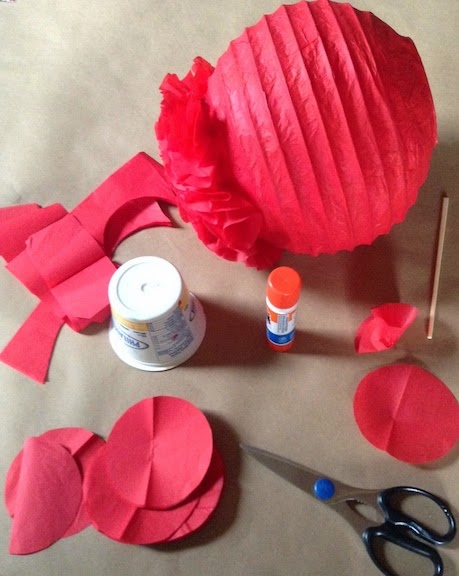 I used one of my paper lantern for a base and covered it with red tissue paper using a homemade mixture of white glue and water. I cut many tissue disks and made simple little flowers, gathering and twisting the centre to create a stem. 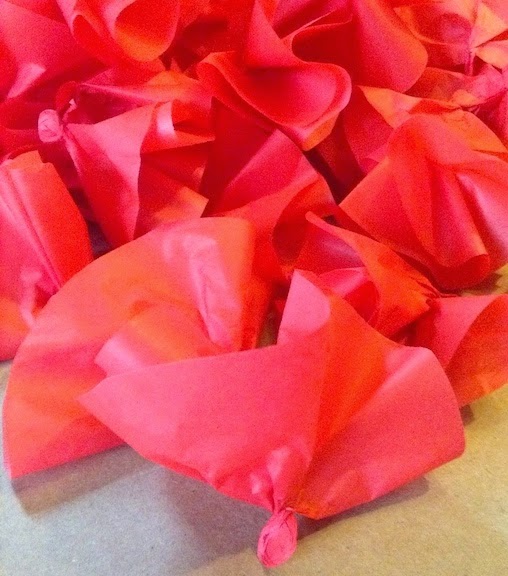 I made a whole bunch of flowers while watching TV at night and then glued them the next morning.
I repeated this process over several days to cover my two lanterns.
I first used a glue stick, but switched to spray glue soon after. A shop stick to press the flower down into the glue was useful. 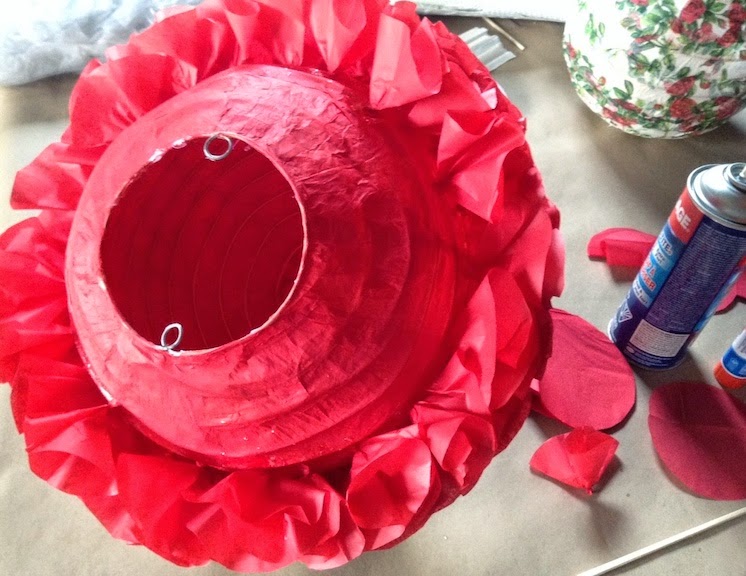 I ended up with a ball measuring 60" in circumference. 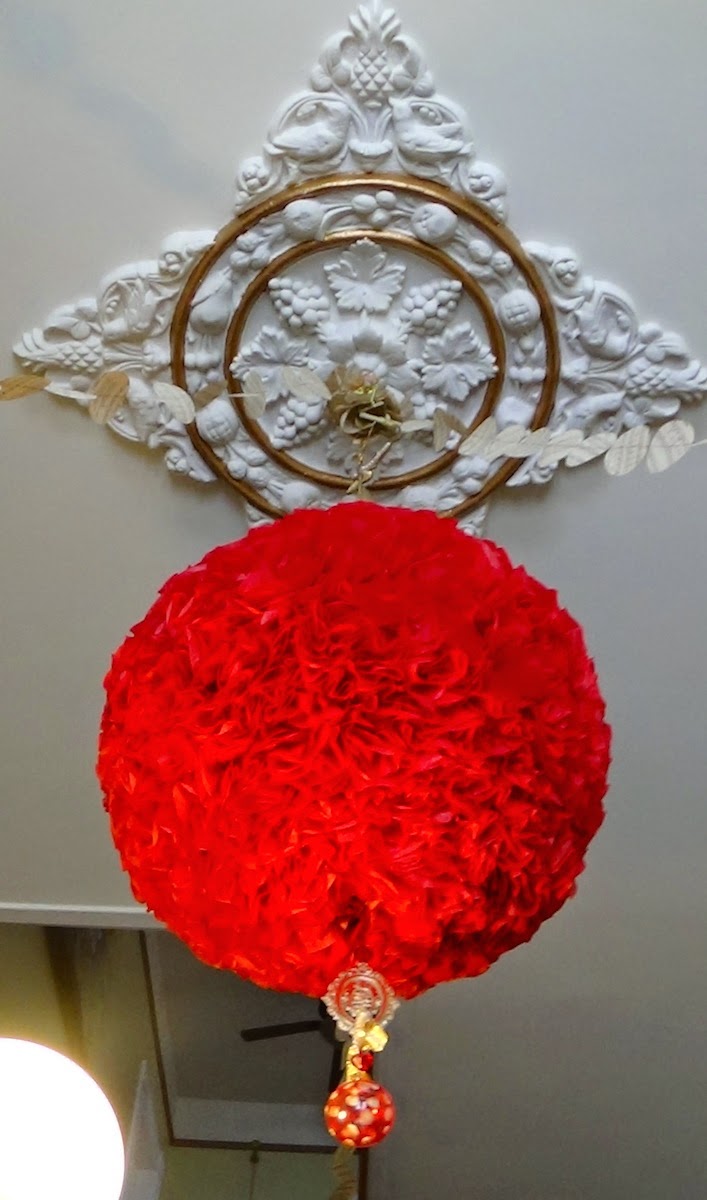 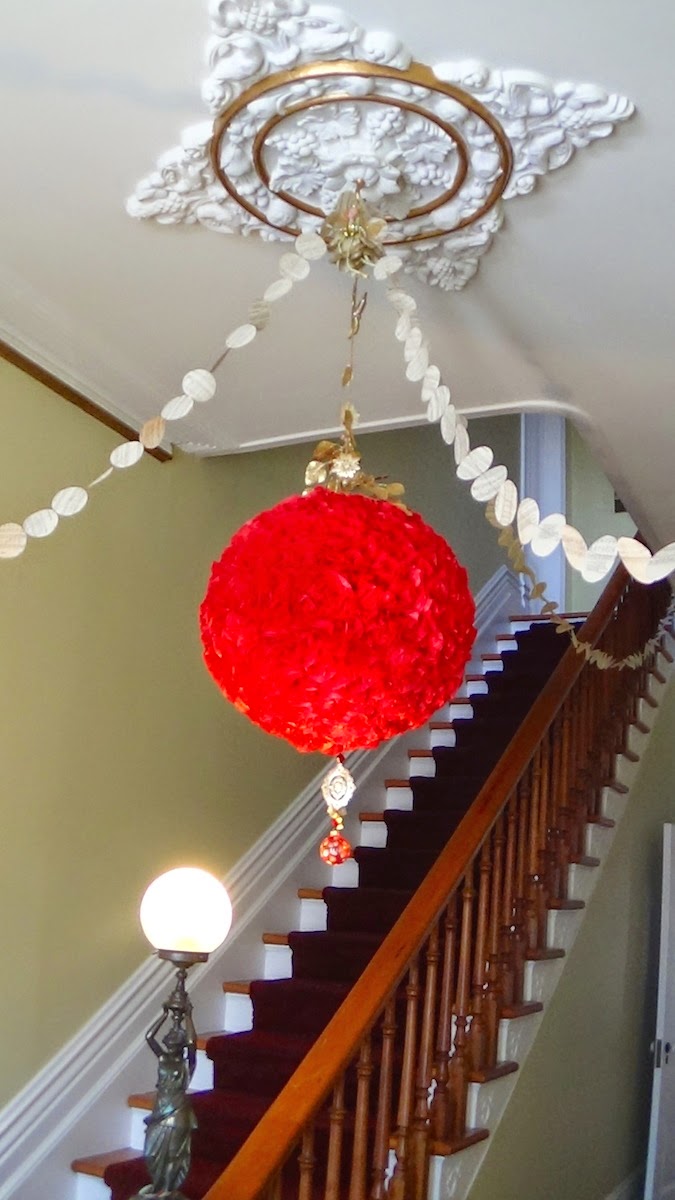 It now hangs from my entrance medallion. 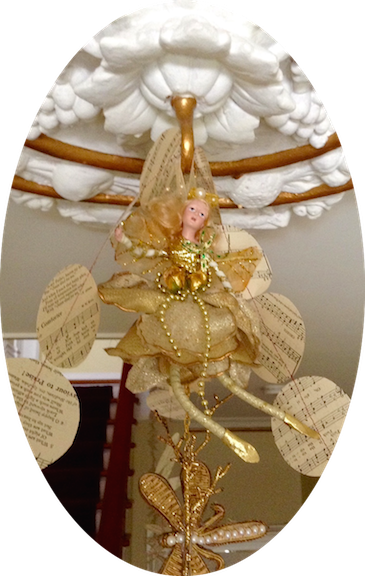 My daughter contributed to decorative details, such as a fairy, dragonfly, leaves and branches to suspend the ball… 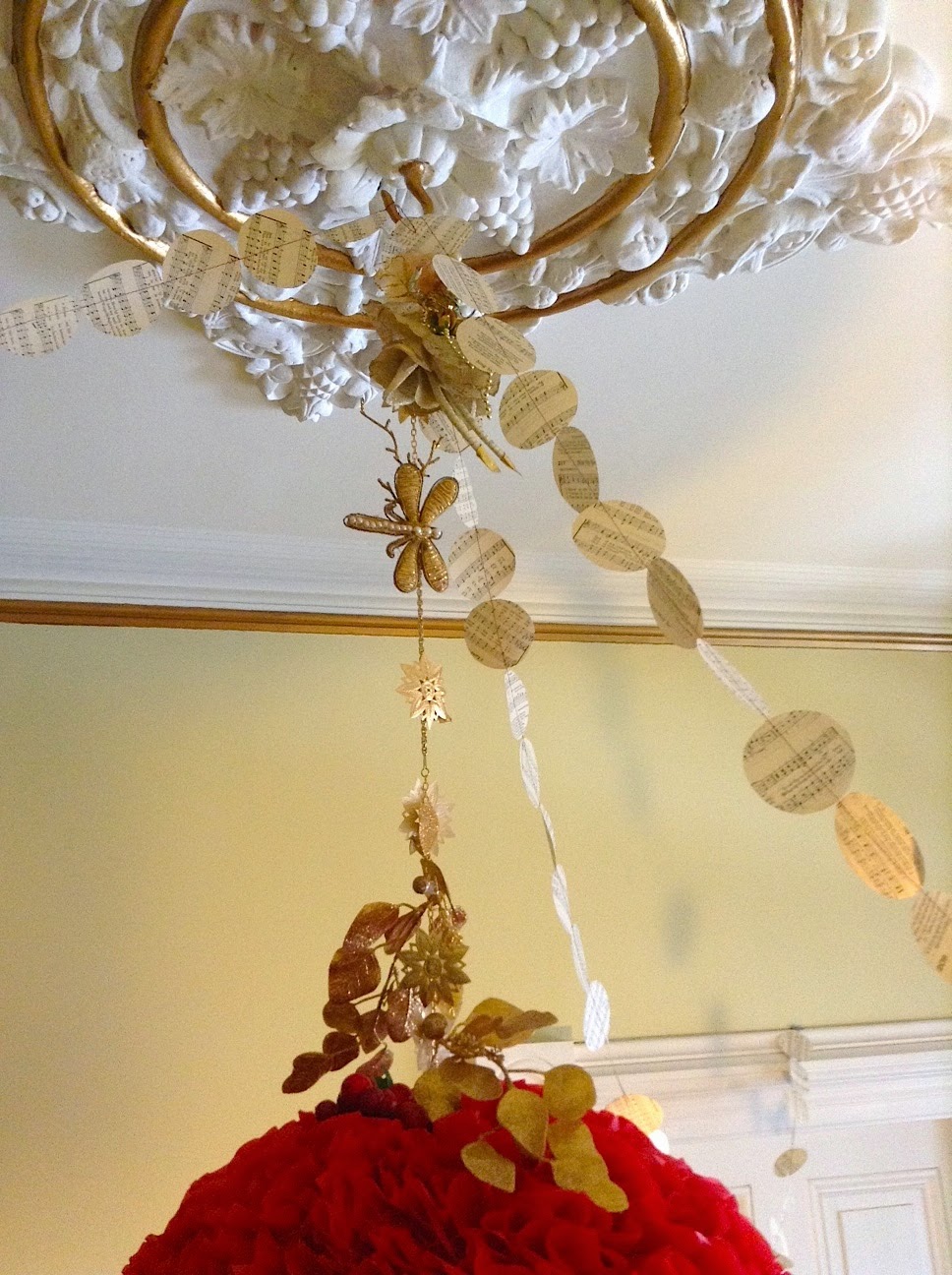 and she made a lovely paper garland using pages of an old and damaged hymn book. 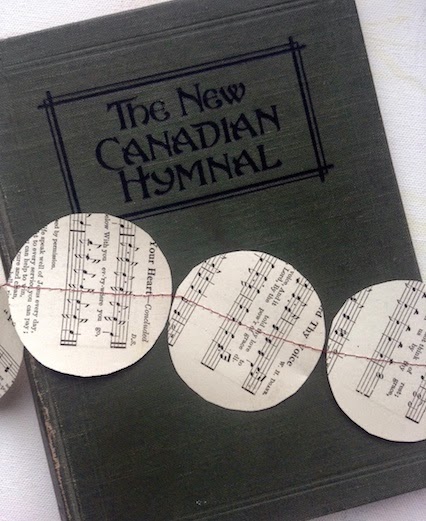 Hanging from the bottom, a glass ball that Astrid painted when she was a tiny fairy. 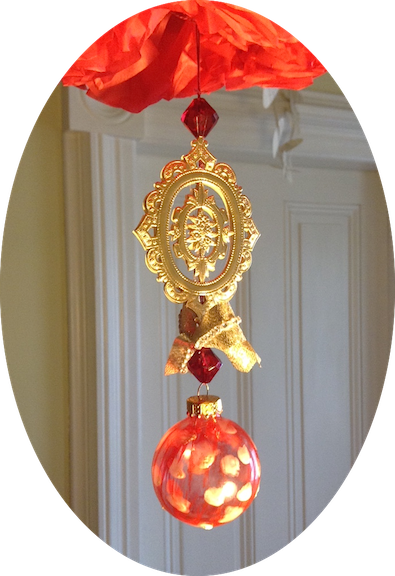 The dining room chandelier was also given the bold red treatment with a smaller tissue ball measuring 41" in circumference. 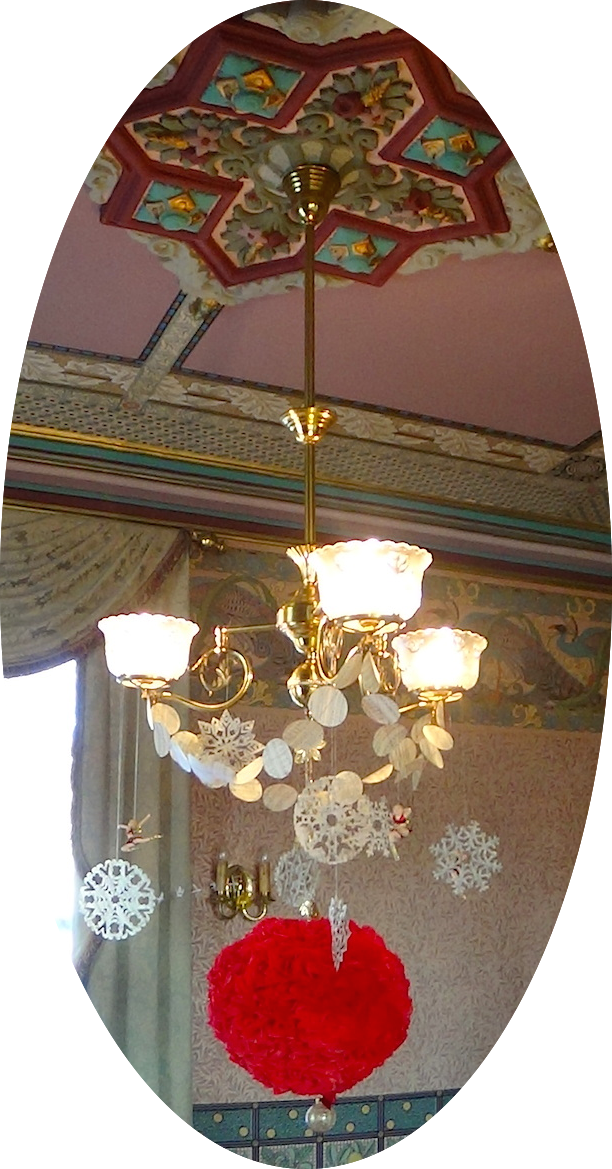 The little acrobat fairies are back, but this year I've added paper-cut snowflakes and garland. 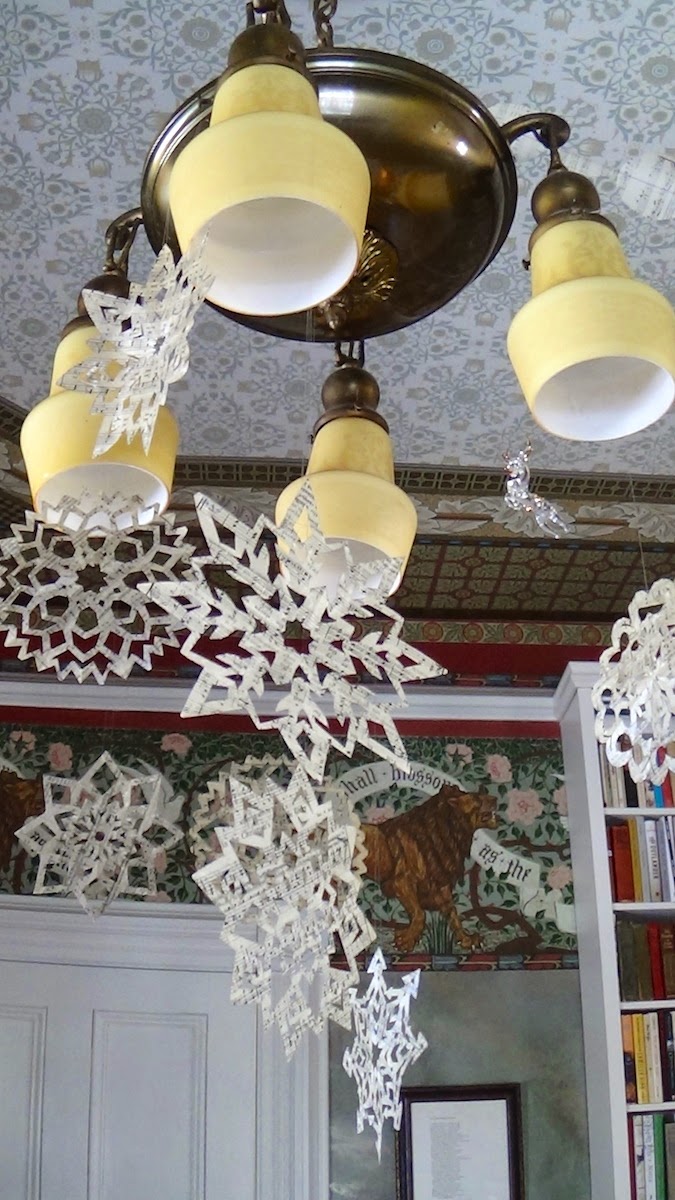 I also made paper snowflakes to hang in the library, made from the pages of the old hymn book. I waxed the snowflakes so they would stay flat and firm. To wax them I used two used dryer sheets for each snowflake. The snowflake is sandwiched between the two dryer sheets, I then iron them on a low setting. There's just enough wax left on those sheets and the snowflakes smell good as well. Use an old iron or protect your good one by placing a thin cloth or paper over your work.

Come back to see this year's Christmas cedar dress.