The summer of 2015 in our area has been perfect for my garden's health and growth. Several days of beautiful sun followed by a day or two of heavy rain seems to have been what my garden needed to produce its bounty of fruits, vegetables and flowers.

Every spring I add to the earth, the compost from my kitchen waste, but this spring, I sprinkled a
50-pound bag of compost from Cedar Row Farm over the yard.
It made a huge difference. 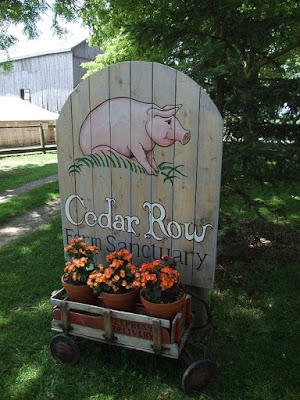 Cedar Row Farm is a place of hope for animals that have been rescued from the abuse, neglect, and slaughter found on farms. Hundreds of farm animals, including pigs, cows, goats, sheep, donkeys, rabbits, turkeys, chickens, ducks and geese have been rescued since the sanctuary began in 1999. Located just ten minutes from my home, it's a little piece of heaven on earth.

My garden is entirely organic, which means it's full of insect activity.
If you look carefully, you will find the good, the bad, the beautiful,
the scary and the slimy.

Not a huge mosquito, as I use to think. They are harmless, just clumsy flyers.

So delicate and pretty. A good one.

Gorgeous and a must in one's garden. Got to plant more milkweed and butterfly bushes.

These slow and slimy ones are voracious eaters; my poor hostas look like colanders. The slugs left their marks in almost everything. Sprinkling broken eggshells around the plant kills the mature slugs, but does nothing to the larvae that have hatched in the plant.

This fancy, goth-looking fly is an important pollinator and has a proboscis, just like a butterfly. It's the larvae of the tiger bee fly that feeds on carpenter bees. I'll let mother nature
decide if this one is good or bad.

Wasps look very elegant to me, but they also scare me a lot. I'm particularly allergic to their sting.


The annoying ones! But at least they don't damage the goods.

I love bumble bees, they are so cute and work so hard. I wasn't able to photograph a honey bee though - very worrying.

At this early stage of life, it has no wings, but boy can it jump. It's gone in a flash.

Millions! I see them hopping out of the way as I walk in my yard.
They are the sound of summer in the country.

The giant ichneumon was not in my garden, but in my house. It measured approximately 8" from the tip of its antennas to the end of its ovipositor. I had never seen this insect up close except in a photo and was shocked by its size. I found out that it's a beneficial insect, so it was captured in a glass bowl and out it went.

Last, but not least, my favourite. I noticed it after it had just come out of its shell. Beautiful, but bittersweet as her song marks the beginning of the end for summer and
for the cicada's short winged life.

I'm always amazed that if you leave mother nature alone, things will balance out; it's called bio-control. But sometimes, a little help is needed with natural homemade products. Next season, I'm thinking of introducing some live praying mantises and attracting more birds.

A few seasons ago, we lost a tree to the emerald ash beetle.
In this cases, drastic measures are needed. I was so glad to read recently that scientists have high hopes in the introduction of predatory bark-foraging birds and predatory wasps to keep the noxious beetle in check. Woodpeckers, nuthatches and Chinese parasitic wasps
could be our new superheroes. 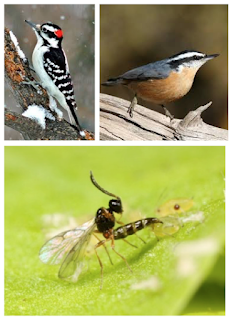 The Dusty Victorian has its own little superhero in our dog Chaz.
He patrols the yard like a little soldier making sure the wild rabbits, the squirrels and the skunks are kept at bay. Unfortunately, he won't tolerate birds either.

Must enjoy every moment, while the garden is lush and alive. 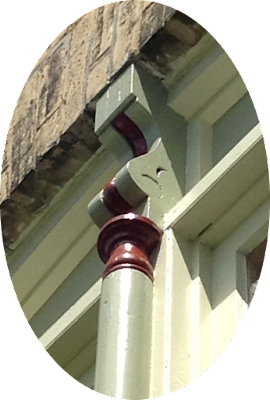 When one owns an antique home, one needs patience. Sometimes a project needs a few years to be completed. The parlour window - aka my studio window - is an example. In June 2011, I did a quick painting and glazing job, just to protect the wood and make it less draughty until I could get to it and do a proper restoration. Four seasons later and it's done.

Our contractor for this project was Brian Harris of Heritage Renovations. He removed the windows making sure to note original placements. Each window had slightly different measurements.
Through his contacts with Amish wood craftsmen, the windows were perfectly reproduced. We highly recommend Heritage Renovations; Brian Harris is a real pleasure to deal with. In our case, he had to work with an antique house, but he can handle pretty much anything: new homes, homes designed for people with special needs, even bridges.

The new wood windows were re-installed in 2013, but only this season was I able to strip the paint and do a proper restoration. The old windows will retire in the basement on the DV's architectural salvage shelves. 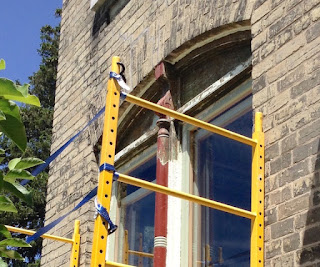 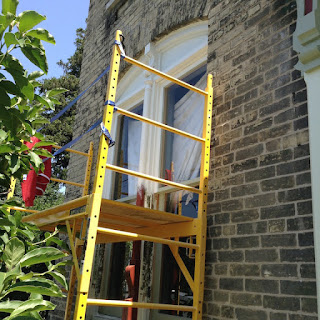 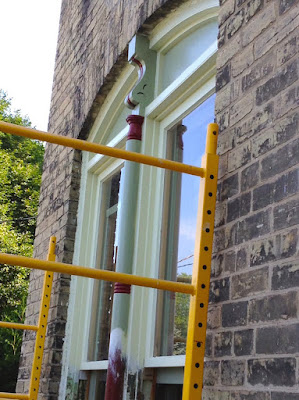 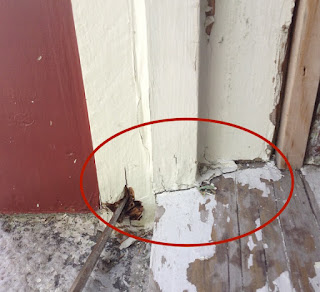 In the lower portion of the window, there was rot in the frame. You can see my screw driver poking the soft, crumbling wood. 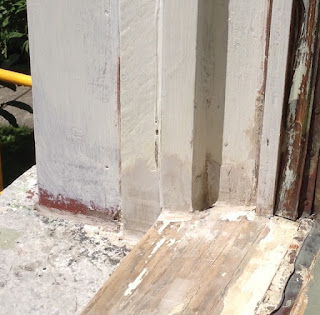 Wood hardener and epoxy did the trick.
"Ah, the smell of epoxy in the morning, it smells like… restoration" 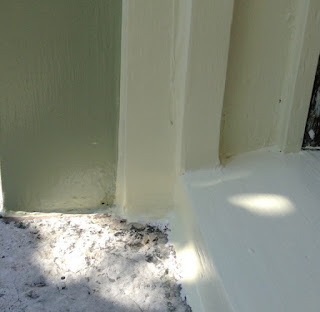 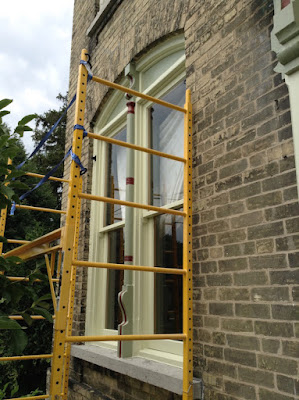 Now for the shutters. Below is a shot of the DV circa 1940.
Note the 'split shutters', rarely seen. The originals are long gone, but the previous owners were diligent in having them perfectly reproduced, just as we did with the windows. 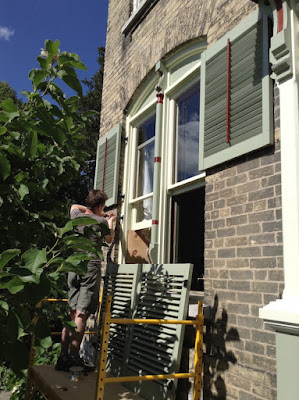 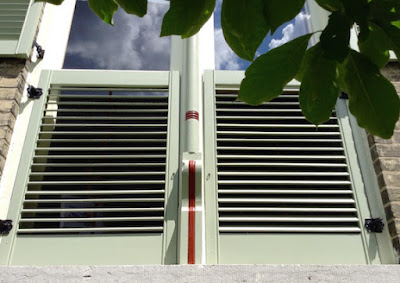 The split shutters permits me to 'customize' the amount of light in the studio, all the while
allowing privacy. 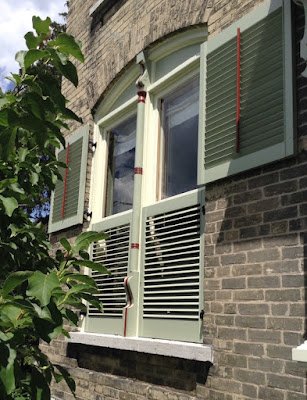 Voila! Too bad it's partially hidden by my magnolia. 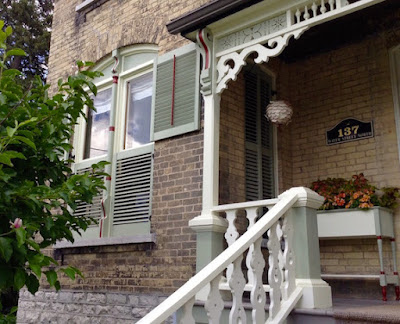 Shutters really dress up a house and I love that most of them can still open and close properly. 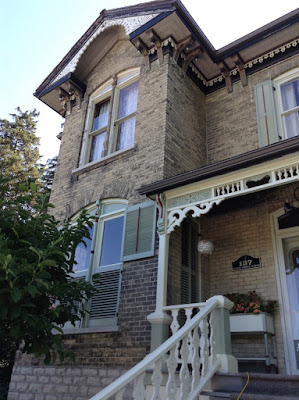 The last window to be restored on the DV is the top tower window, aka Brian's study, aka The English Study for our B&B guests. This will be a job for a contractor along with the upper trim near the roof line.
Must make more money before that can happen.