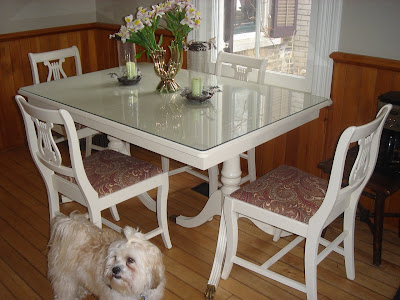 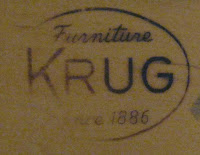 Another great find from our local Salvation Army Thrift Store was this reproduction Regency Style dining set from Krug (circa 1960). When I first saw it in the store, it was extremely dirty, it smelt musty and smoky, and the fabric on the seats was so stained that it was sickening. Basically, the set was disgusting. But as I often say, you have to look beyond the offensive visuals to see the true nature of the item. All pieces of the set were very sturdy. Any damage to the wood was superficial and could easily be fixed. The table has folding extensions that can seat eight people. Besides, we needed a kitchen table and it was super cheap. I don't have pictures of it in that state because I had not started a blog a that point, but you are probably better off for it - I don't want to induce nausea. Anyway, I gave the set a makeover. I stripped the crackling varnish, puttied the holes and scratches (cat claws), gave it a good sanding, painted it, reupholstered the seats and had a piece of 1/4¨ glass cut to size for the top. I think it looks pretty respectable now. It doesn't go with the country style kitchen we have, but this kitchen will eventually be renovated and the table is put to very good use.
Posted by Anyes K. Busby - Studio Vignette Fine Art
Email ThisBlogThis!Share to TwitterShare to FacebookShare to Pinterest

Wild Rabbits at the Dusty Victorian 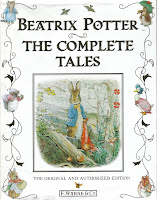 Having been city dwellers most of our lives, Brian and I were astounded to see so much wildlife around us in St Marys. Marmots, mallards, geese, hawks, owls and the odd red fox are just a few examples, but my favourites are the wild rabbits. It may be that they remind me of the times I read to my daughter the tales of Beatrix Potter.
While I was in Montreal a few months ago, Brian called me to tell me that the dogs had discovered a nest of 5 wild baby rabbits at the rear of the house. Violet had cornered one and was frantically licking his head as to say "Don't worry, I love puppies". Though we knew that the dogs would not harm them in any way, we still did not allow them access to the back yard. The bunnies settled back into their nest. A few days later, Brian called me again to give me some sad news. Two of the five bunnies had fallen prey to some creatures of the night, leaving a bloody crime scene and two mangled bunny bodies on the stone patio. Several weeks later, a third one was found dead for no apparent reason. All three were buried in our back yard. The nest is no longer occupied. I spotted one of the remaining two a few days ago and was able to take a few shots of it. I also took a few shots of adult wild rabbits regularly seen around our property. Being a food source for pretty much anything that hunts, they have developed excellent "run and hide" behavior - so please forgive the blurry images; I had to take them from afar. 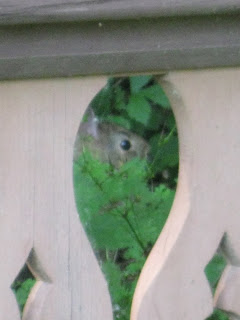 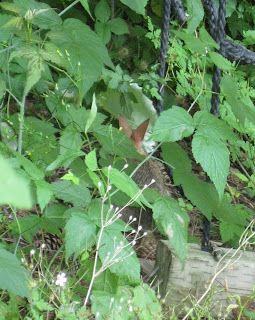 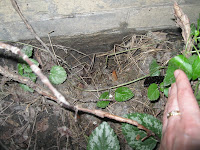 This is the wild bunny nest. It's basically a hole in the ground lined with rabbit fur. Imagine them all piled up one on top of each other keeping warm. 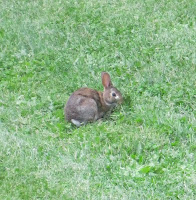 This one is a juvenile. 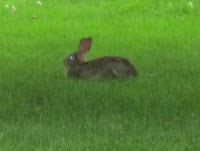 This one was quite big with fully grown ears, obviously an adult.

If Beatrix Potter was alive, I think she would be a very good friend of the Dusty Victorian. Here she is at her farm, Hill Top, c. 1907.
Posted by Anyes K. Busby - Studio Vignette Fine Art
Email ThisBlogThis!Share to TwitterShare to FacebookShare to Pinterest

This past week was rainy and cool - not very pleasant for outdoor work. Besides, my back was on the fritz again. In these moments, I do my least favorite things: stripping and cleaning the hardware for the shutters.
After chipping away at layers of paint to expose the screw, I remove the hinges from the window frame. I don't believe they'd ever been removed because I was seeing bare wood where the hinges once had been. 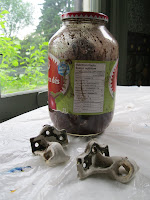 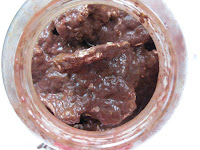 I then put them to soak in a glass jar of eco stripper and forget about them. Some of the hinges have been soaking for weeks. It looks pretty nasty, but at this point, it's not hard work at all, but it is messy. The paint has separated from the metal and it comes off like removing the skin of a cooked chicken. 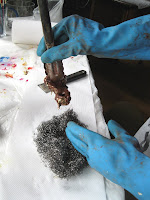 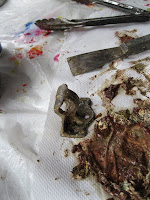 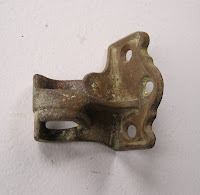 I clean them with soap, water and a tooth brush to remove whatever is left. Then they're spray painted with a heat tolerant paint. Those hinges get really hot, being exposed to the sun all day.
Posted by Anyes K. Busby - Studio Vignette Fine Art
Email ThisBlogThis!Share to TwitterShare to FacebookShare to Pinterest
Newer Posts Older Posts Home
Subscribe to: Posts (Atom)