Painting the Kitchen - Part I

Shots of the DV's kitchen have never been posted before and you will soon understand why. It's not quite a source of pride. We are not financially ready to do a full kitchen reno, but it's long over-due for a good paint job. 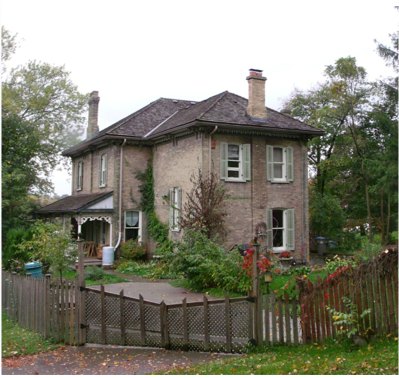 To put things in context, the kitchen is located at the back of the house, on the main floor, in the narrower portion of the house that juts out. 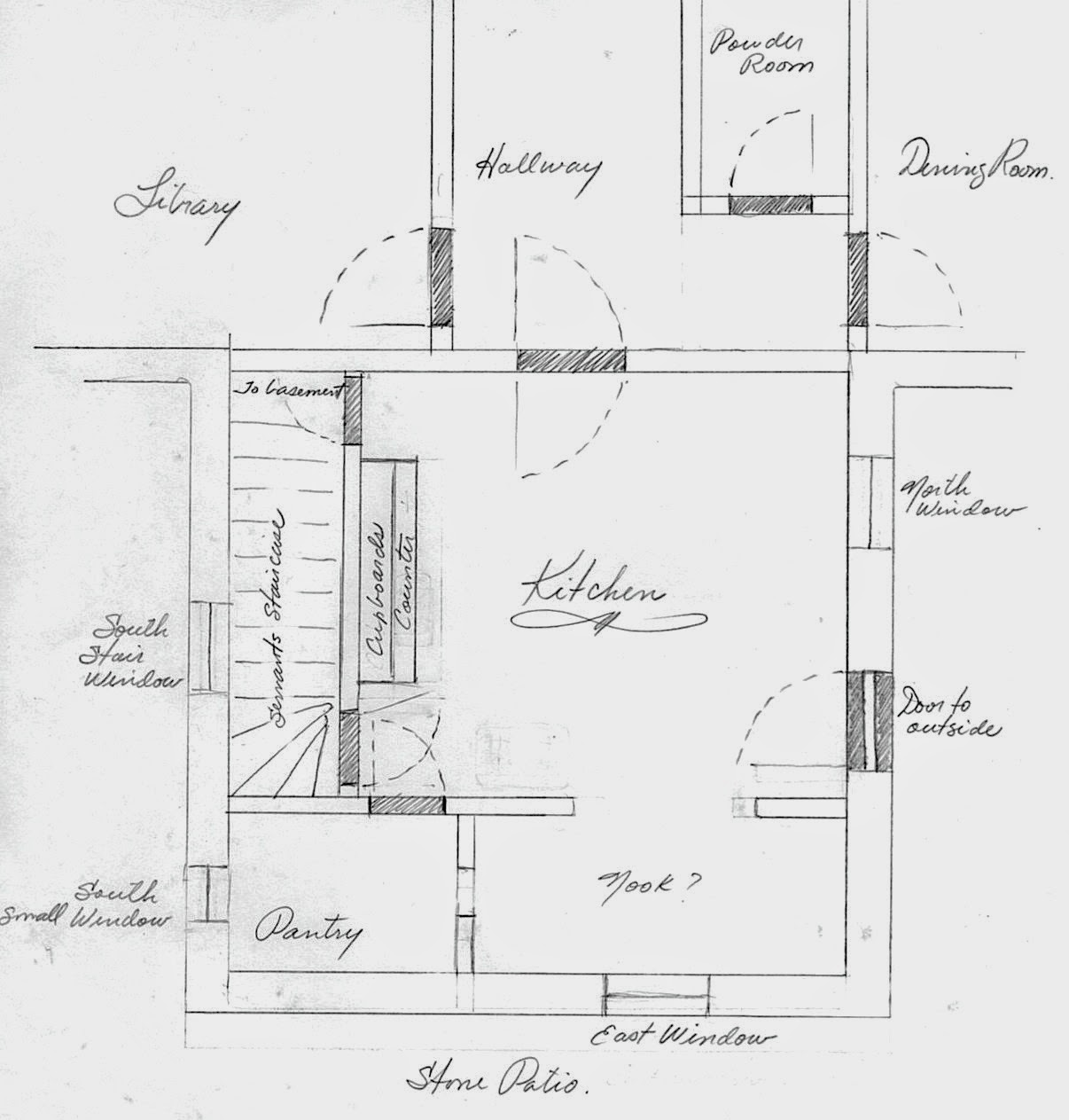 Here is a rough plan of the kitchen. Note the nook area at the bottom right of the plan - a source of bewilderment. Its original cupboards, shelvings, water pump and wood burning stove were removed, most probably in the 1940s. We do know that the door and stairs to the basement were originally under the main staircase in the hallway, now the powder room. One has to keep in mind that kitchens were strictly considered utilitarian rooms up until the post-war boom. So we definitely can say that the kitchen represent a pre-Second World War frame of mind. 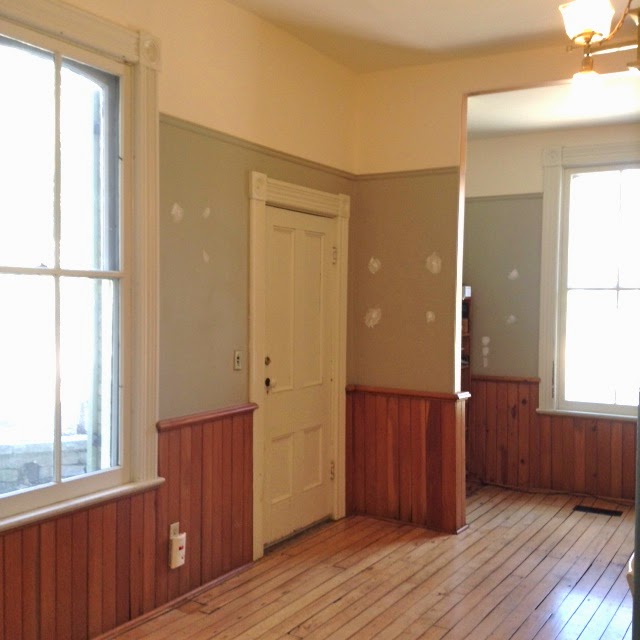 What I do like about our kitchen is that it is a good size - approximately 275 square feet - and in time, has great potential to become a source of pride. 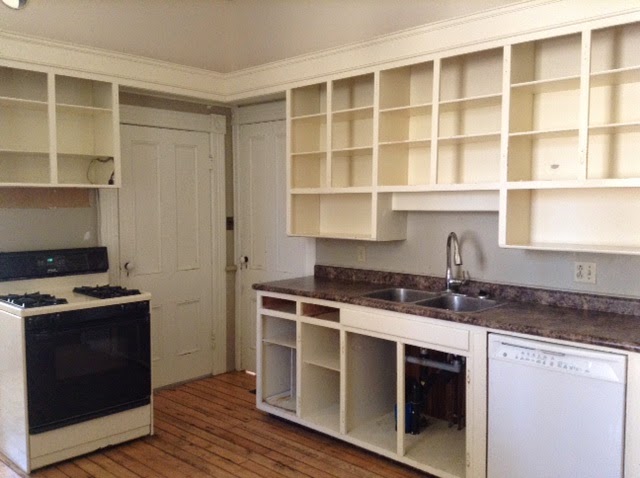 You can see two doors in the corner. The one on the left is the pantry door and the one on the right is the servants' staircase door. Major door collisions happen on a regular basis. 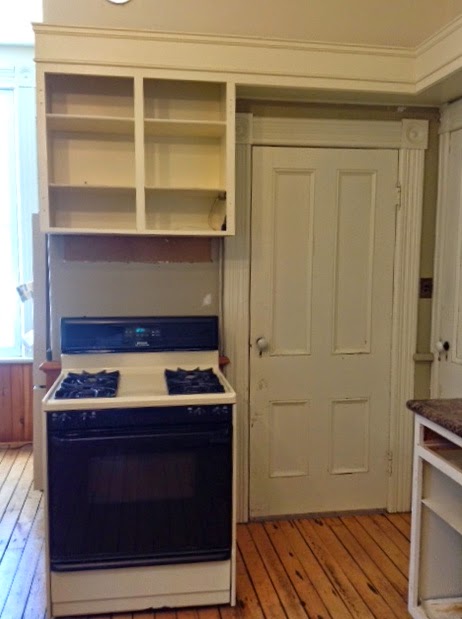 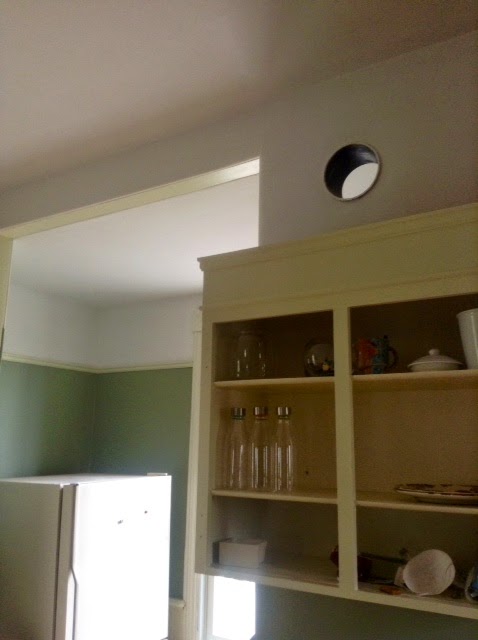 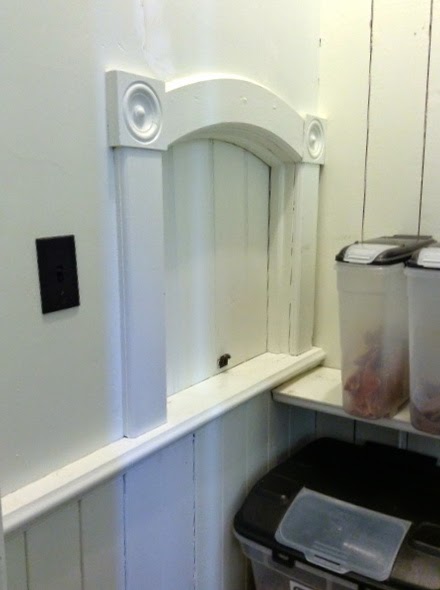 Entering the pantry, there is a little opening with a panel that slides upwards. A food service type of opening that is usually in a wall between a kitchen and a dining room. 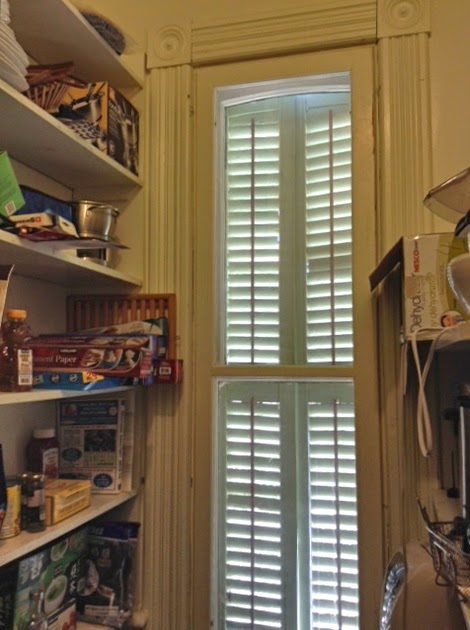 At the other end of the pantry there is a narrow window. The shutters are kept closed because the sunlight can really heat up this little room. 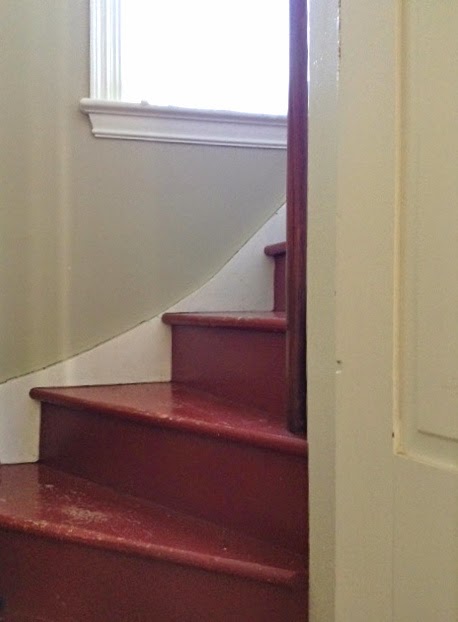 The servants' staircase also has a window, keeping in mind that the original gas lighting would have been limited to the main rooms of the house. 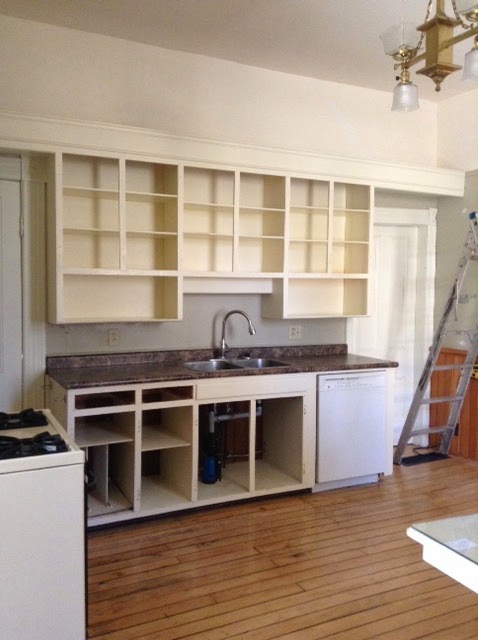 Behind the counter wall are the servants' staircase and the stairs to the basement. The cupboard doors have been removed for painting.

For my future kitchen, I would love to get my hands on an old sink such as this one. 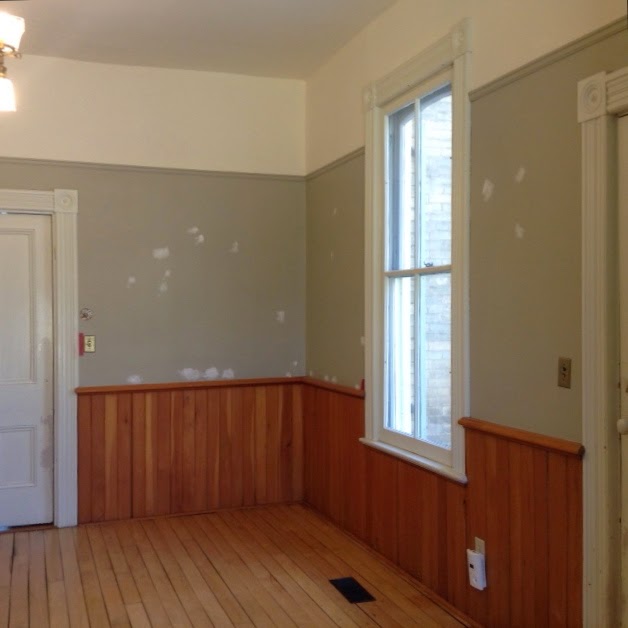 The wainscotting is original and handmade. Each board has a slightly different width, the spacing is not quite even and the edges are a little wobbly - love it.


Also for my future kitchen, gorgeous floor to ceiling cupboards with ladder . 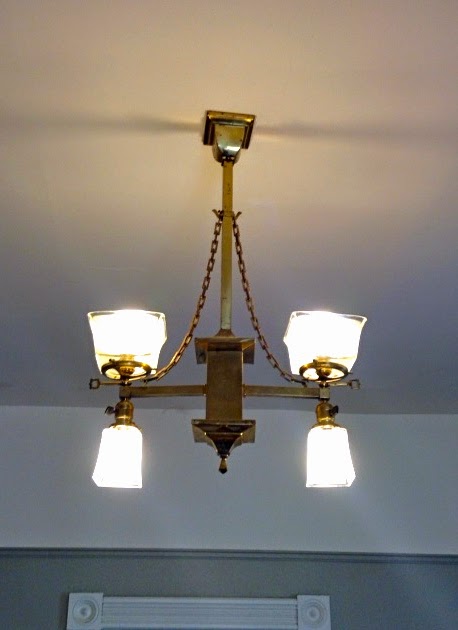 When we bought the house, we were told by our real estate agent that the hanging light fixture was original to the house and was converted from gas to electricity early on. 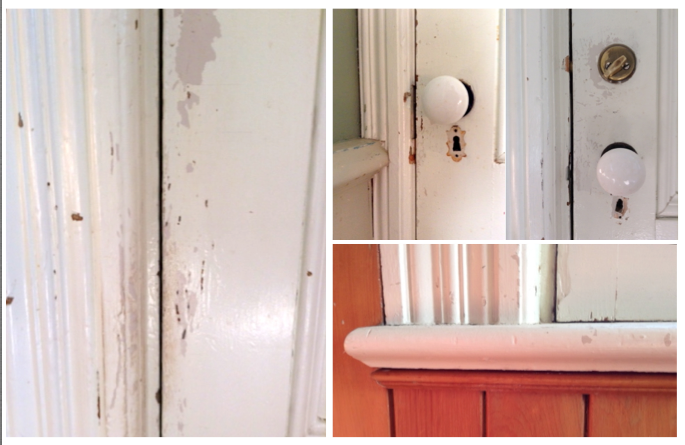 Some close-up shots of the damage seen all around the kitchen. No matter how clean it is, it never looks clean. 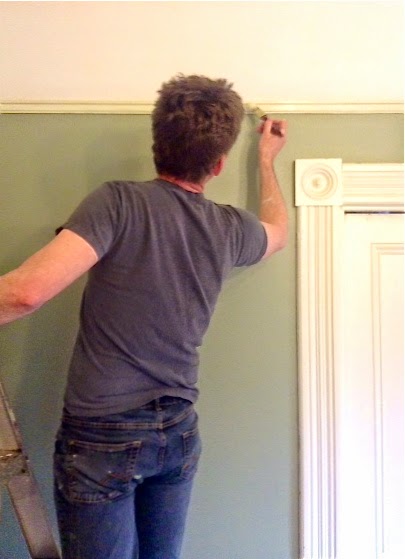 The ceiling is painted, now for the little piece of molding. The ceilings are as high in the kitchen as they are everywhere else in the house - 10½ feet.

The green walls are done, now for priming the wainscotting. 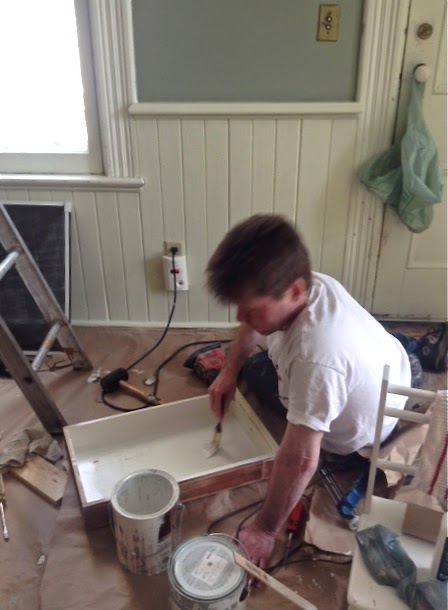 The wainscotting is painted, now for the drawers. There are only two drawers in the kitchen and very little counter space - it's amazing our capacity to adapt to impractical situations. 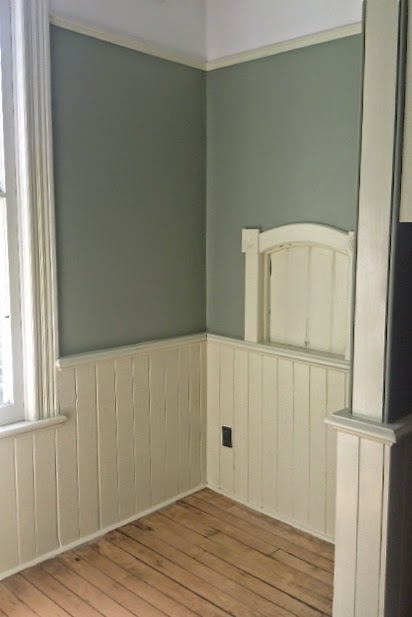 From the other side of the pantry wall, in that weird little nook, you can see that food service window. 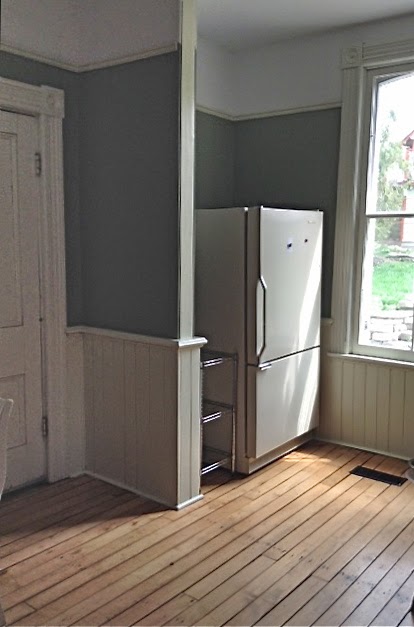 We've placed the refrigerator on the opposite side. I know, it's a mile away from the counter,
but there's no choice.

Researching early kitchen photographs, I was hoping to find one that would have a similar configuration to ours. Here is the closest I came to it. That weird nook (although bigger) is present in this old photograph and to my surprise, the cooking/heating stove is turned back to the seating area of the kitchen. The stove in our kitchen would have been smaller.

You can see the water pump on the counter below the pots and pans. In our kitchen, the water pump would have probably been where the fridge is today since the water reservoir is located just beneath in the basement. 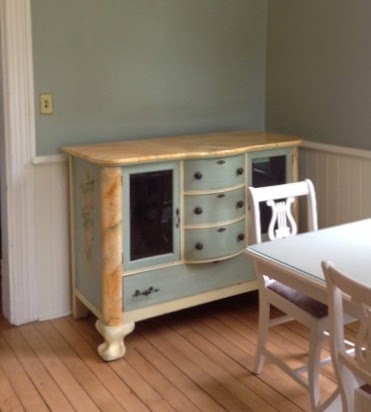 My painted buffet, is now in the kitchen and coordinates nicely. 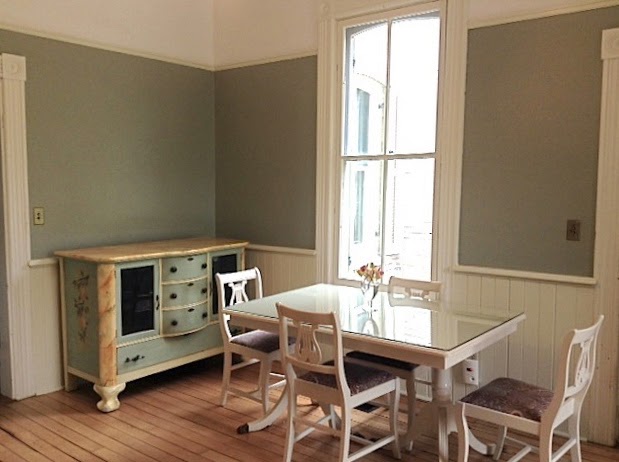 The kitchen table and chairs don't coordinate, but they will do just fine until the real reno happens - whenever that is. We're not done, we still have to finish painting the cupboard doors, window and door frames as well as the five doors. Although I like baking (because of my sweet tooth), I never was big on cooking and kitchen stuff in general, but now that the kitchen is starting to feel and look better, I find myself more inspired by recipes and lovely porcelain.