At this stage of the heritage designation procedure a notice is placed in the local newspaper.

In the process of requesting a heritage designation, Mary Smith and Larry Pfaff of the Heritage Committee brought to light a sad events regarding past owners of the Dusty Victorian, which resulted in a gradual and severe deterioration of the house between 1957 to 1975.

When Leonard Harstone passed away in 1932, he left behind his widow Beatrice and son Robert. They continued to live in the house until Mrs Harstone died in 1957. Known to be difficult and demanding, she did not approve of Robert's engagement to Elsie Hyde, a local girl, whom he had known most of his life. Whatever Mrs. Harstone's reasons, she exercised her power to prevent the marriage. It was not until her death in 1957 that Robert and Elsie publicly acknowledge their attachment and later were married. From this point on, the house was locked up with all of the homes furnishings and Mrs. Harstone's personal belongings. Even the many preserves she had made and stocked away were left untouched for nearly twenty years. Slowly, the house fell into disrepair, rotting away and loosing many attractive features. It was not until Robert's death in 1974, that his wife Elsie, put the estate up for sale and it caught the attention of Peter Behn and John Sheeler. A house that had been one of St Marys' gems was nothing more than an abandon, dilapidated house when they purchased it in 1975.

Seen below is the house in May 1975
The second storey balcony had rotten away, many shutters were missing, the gingerbread balustrade and the grand sweeping stairs - gone, as is the lush landscape, just to name a few things.
Through the Heritage Committee, I had the privilege and immense pleasure of communicating with Mr. Behn. The priceless information and photographs he has so generously offered brought light to many questions I had. To learn of the staggering amount of restorative work they had done was simply mind blowing. They had restored the house to its original design and made numerous improvement in the process, taking care to preserve its intrinsic style. Mr. Behn and Mr. Sheeler (now deceased) owned an antique shop in downtown St Marys at 159 Queen St. They were successful in having this property designated heritage. As for 137 Water St. North, that would come much later with yours truly.

This is a shot of the large parlour now our library. It probably represents best how the house was during the Harstone ownership. The 'L' shape bookcase holds the Harstone's law books which have remained in the house ever since, but this bookcase is long gone. The colours for this room were very dark - fashionable style at the turn of the last century.

Furnishings and decoration styles may have change through out the years, but what is evident to me is the labour of love this house has benefited from since 1975. The fireplace was given a beautiful wood mantel, the walls were covered with an ornate golden yellow paper pattern, the windows were elegantly dressed with full length curtains and beautiful area rugs graced the floors. In the shots below, you will see the many gorgeous antiques through out the house during the Behn/Sheeler ownership which lasted from 1975 to 1983.


I was not surprised to learn that Mr. John Sheeler was an heritage activist and was instrumental in creating what is now known as the Municipal Heritage Committee. The first meeting was held in 1977 where he served on the committee's executive. He was involved in the first municipal designations under the Ontario Heritage Act. The Queen Street Bridge and the Opera House are just a few examples of his efforts in the field of heritage designation.

Mr. Peter Behn was an active volunteer at the St. Marys Museum. Beside his expertise in antiques, he had a special interest in gardening. He worked hard to improve the borders, discovering heritage plants that had survived the changes in occupancy of the Dusty Victorian.

"...I am grateful that the house, since our ownership, has found individual buyers who use it as their primary residence. However, it is only natural that each party has their own ideas of what to do with it, and to what extent retain its originality. There are obviously changes which cannot easily be reversed, and a certain 'modernization' is inevitable."

I agree, wall colours and furnishings will change from owner to owner, personal taste and modernization is inevitable, especially in such rooms as the kitchen and bathroom. One needs the conveniences of modern day life in order to fully enjoy one's home. These conveniences keep a home relevant, comfortable and desirable, but respecting its antique nature is important to us. We consider ourselves custodians of this house, trying our best to preserve, maintain and protect the important work previous owners have done before us.

In 1983, the house was sold to Lori Webb Thompson and her husband Mike Thompson where they remained for twenty five years, raising their three children. Mrs. Thompson left her remarkable William Morris vision on the walls and ceiling of five major rooms, which can be seen in the previous post. Not to mention the embellishment of the exterior landscape with the integration of limestone retaining walls, a slate patio and a two story Victorian style shed/playhouse. 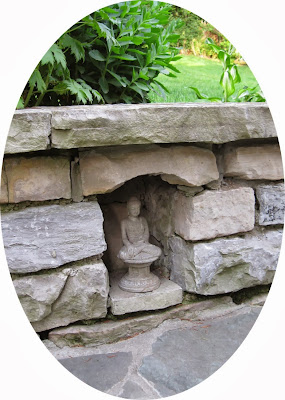 A house without a caring owner is as destitute as a homeless person.